Canfield Public Works is responsible for clearing off the roadways of approximately 40 lane miles inside the City limits of Canfield, including State Route 224 and State Route 46. In an average snowfall season we dedicate 1,000 tons of de-icer (salt) to the roadways each year.

Snow and ice control is considered emergency work, which must be accomplished for the safety and well being of our community. The goal of Snow & Ice Control is to make all highways, streets, and cul-de-sacs safe and accessible for vehicular travel during and after a snow/ice event.

Snow plowing is not productive until snowfall reaches a depth of two inches. Activities vary depending on the type of snow/ice event. For light snow fall and ice events, crews will attempt to get a layer of de-icer on the pavement. If the accumulations exceed two inches, crews will plow and salt in order to clear streets and allow melting materials to activate and reduce the amount of icy patches on roadways.

The city’s removal operations goal is to clear the most highly traveled roadways and major streets to facilitate traffic moving in and out of the city, emergency travel for fire, emergency medical and police personnel is the biggest snow removal priority. This is why primary streets are cleared first. The second priority is to clear minor streets, subdivisions, cul-de-sac streets. Because each snow/ice storm is different, there is careful planning in deciding how to handle snow removal operations. The number of trucks assigned and the plan implemented during any given storm is dependent on the severity of the storm

How can i avoid getting plowed in?

Although the city’s plows often leave snow across driveway entrances, the plows try to keep it to a minimum. This snow removal is the responsibility of the residents. Putting snow from driveways into the city streets creates a hazard for drivers and a liability for the responsible party. When clearing your driveway apron, it’s best to pile snow past the driveway in the direction of travel.
Citizens and plowing contractors should NOT shovel, plow, or blow snow onto or across any City street. This delays the process of clearing the streets and is prohibited under City Ordinance 311.01 and Ohio Revised Code 4511.74. 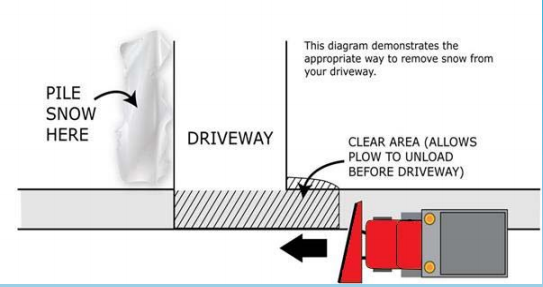 The City of Canfield only clears the sidewalks around the Village Green, in the Parks, and around City facilities. It is the responsibility of the property owner to keep their sidewalks clear for the benefit of all.

City Ordinance 351.19 SNOW EMERGENCY Whenever, during any period of twenty-four (24) hours or less, snow falls in the City or in a section thereof to a depth of three (3) inches or more, an emergency is declared to exist in that such a heavy snowstorm constitutes a serious public hazard impairing transportation, medical care, fire, health and police protection and other vital facilities of the City.  The emergency shall continue until an announcement by the City Manager that snow plowing operations have been completed, which announcement shall be made by postings and announcements by two (2) local radio stations or two (2) local television stations and shall constitute notice to the general public of the existence of the emergency.

Clear all vehicle windows before driving, give yourself plenty of time to get to your destination, make sure that your tires are in good condition, buckle-up and always keep a safe distance from other vehicles, including plow trucks.

The City of Canfield is dedicated to providing exceptional municipal services in order to enhance the quality of life for all citizens.
Subscribe today for the City’s Latest News, Events and more!

The City of Canfield is dedicated to providing exceptional municipal services in order to enhance the quality of life for all citizens.
Subscribe today for the City’s Latest News, Events and more!